Anyone who has lived in Burma/Myanmar for some time will notice sooner or later that numerology is rather important for the Burmese (regardless of ethnic group). Whether it is the number nine, or the banknotes with strange denominations such as 35, 45, 75 or 90 Kyat. To name just a few. A few days ago I visited my friend Yang Lama, the abbot of the Tibetan monastery here in Maymyo/Pyin Oo Lwin. He was busy preparing oil lamps for a ceremony and told me that he needed 108 of them. Since I always have an open ear for matters relating to numerology, I asked him, “Why 108?” He explained to me that the number is composed as follows: 52 higher chakras (from head to navel) and 48 lower chakras (from navel to feet). Then there are the five Buddhas Vairocana, Amoghasiddhi, Amitabha, Ratnasambhava and Aksobhya. Also called Adibuddhas or Tathagatas. The three jewels (Buddha, Dharma and Sangha) round up the number. Interesting to me insofar as I consider 108 to be a purely astrological number. However, this refers to Theravada Buddhism, which is predominant in Myanmar, while Tibetan Buddhism belongs to the Mahayana school.

So what is this number 108 all about? First of all, it naturally occurs to everyone in this country that this is the number of pearls on the Buddhist rosary (badi:). The Buddha’s footprint contains 108 auspicious signs. And the cross sum of 108 is – 9! On the platform of the Shwedagon pagoda, directly in front of the temple with the Singu bell (between the western and northern staircase), there is an inconspicuous stupa called the Planetary Stupa. If you go closer, you will see sixteen niches. Half of it houses statues of gods who sit on their resp. mounts (see below). They symbolize the days of the week. Eight Buddha statues sit in the niches in between, because one of them is assigned to each day. However they have nothing in common with the above mentioned Tathagatas but come from the ranks of the 28 Buddhas worshiped in Burma.

The statues of the gods symbolize the eight days of the week. You might ask yourself: Why eight? Well, the Burmese week consists of eight days! Why’s that? Simply because the number of days has to correspond with those of the cardinal points and the ‘planets’! However, the week only has seven days. What to do? Very simple: You divide Wednesday and make two days out of it: One of them dedicated to the planet Mercury, the other one to the fictional ‘planet’ Rahu, which can only be seen during solar and lunar eclipses. If you take a closer look, you can see the name of the ‘planet’ on the base of the gods and a number underneath (both in Burmese). Please not that old Indian astrologers considered sun and moon as planets, too (geocentric view of the world). 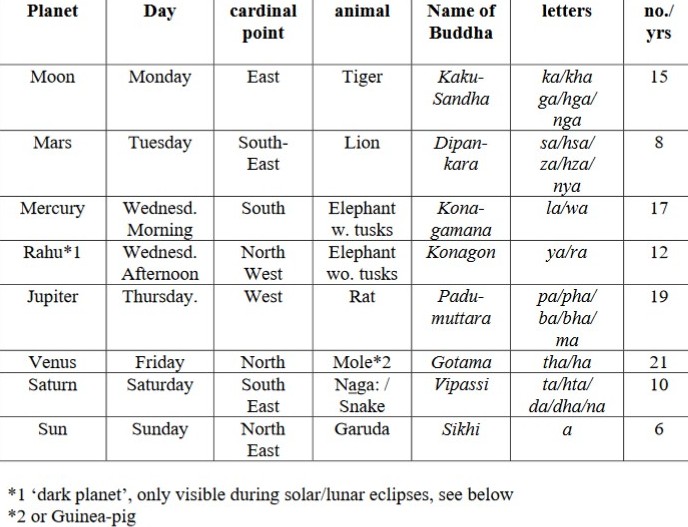 It is generally assumed that a person is under the influence of the ‘planet’ that rules his/her day of birth for the given number of years. Then he/she ‘changes’ into the sphere of influence of the neighbouring ‘planet’. However, the order of the days does not correspond with the order of the days of the week, but reads as follows: Monday, Tuesday, Wednesday morning, Saturday, Thursday, Wednesday afternoon / Rahu, Friday, Sunday! Let me explain this using a ‘Monday child’. The person is under the influence of the moon for 15 years and after this time moves into the area of ​​influence of Mars, in which it remains for 8 years. Then it spends 17 years in the house of Mercury and subsequently 6 in that of the sun, etc. The total is – 108! Furthermore, a group of letters from the Burmese alphabet is assigned to each day. Therefore, one can tell from the name on which day a person was born.

Four of these ‘planets’ are considered auspicious (Venus, Moon, Saturn and Jupiter), the other four (Rahu, Sun, Mercury, Mars), however, as ominous. Under the influence of the latter four one might suffer illnesses and bad luck. The date of birth has traditionally no meaning for the Burmese. On ‘his’ or ‘her’ day, the believer goes to the pagoda and offers flowers at the planetary devotional site (gjou dain), lights candles and pours water over the Buddha statue: one ‘shower’ for every year of his/her life. So if you are curious about the age of a person, just count how many times he/she does it. But don’t include the last one, because that’s for the rest of the life. The annual birthday party which is popular in the West traditionally has no meaning in Myanmar. However, it is beginning to gain a foothold in this country, especially among the urban population. Different character traits are ascribed to those born on the different days of the week. But that’s another chapter …