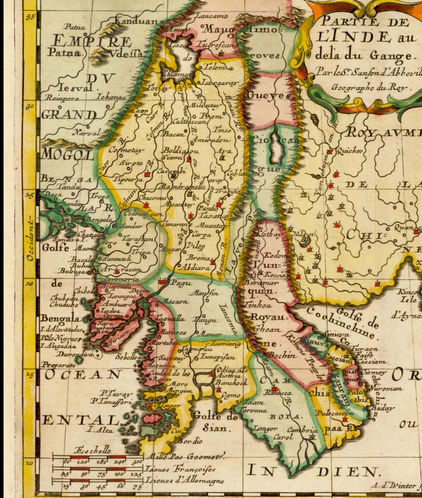 Even the ancient Greeks supposedly knew about the existence of the country. Marco Polo reported about a kingdom of Mien (Myanmar!) with golden and silver towers. After Vasco da Gama’s trip to India (1489) the reports became more concrete. The Venetian Gasparo Balbi was one of the first Europeans to report on Burma. Even then, it seems to have had the image of a fairytale land. If the ‘great’ historians like Harvey (History of Burma) are to be believed, Nandabayin, the king of the Pegu Empire, supposedly laughed himself to death. And why? When he learned from Balbi that Venice was a republic without a king, he had a fit of laughter that he did not survive. My friend, the Burma expert Jacques Leider, however, points out that Balbi left Pegu in 1585 at the latest, but Nandabayin did not die until 1599. So, either the king was extremely slow on the uptake or the story is not true. The Portuguese were already firmly established in Asia at the end of the 16th century. Felipe de Brito even rose to be lord of Syriam, but his rule was short-lived. Nevertheless Burma got caught up more and more in the whirlpool of European rivalry in Asia. In 1826 the Burmese Empire lost its possessions in Manipur, Assam, Arakan and Tenasserim to the British East India Company. In 1852 the province of Pegu followed and in 1885 the whole country became a British colony as part of India. It only regained its independence in 1948.

The first Germans mentioned in Burma were Joh. W. Helfer and his wife Pauline, who remarried after his death (see below) and became Countess Nostitz. He explored the newly won colony of Tenasserim on behalf of the British East India Company. His untimely death in the Andaman Islands put an early end to the research. Dietrich Brandis 1856 became head of the forest administration of British Burma in 1858. By 1865 there were already so many Germans (mainly merchants) in Rangoon that they were organized in a club, which in 1867 bought a dignified clubhouse. At the end of the 19th century it was enlarged and redesigned. There was a lively club life, which abruptly ended at the outbreak of the First World War. In 1917 the clubhouse was expropriated and auctioned at the highest bidder. Since then it has been a Catholic nunnery.

Apart from that, Burma then became the target of what is probably the largest wave of immigration in its history. Millions of Indians came to the country in the wake of the British and left their mark on it for a long time. The war brought many Japanese and members of the Allied forces to Burma. The number of Indians has declined sharply since independence and foreigners were a rare sight. This worsened after Ne Win’s military coup in 1962. Only experts were allowed into the country and tourists were permitted to stay for exactly 24 hours. It was later extended to one week. When I first came here in 1977, there were 20,000 arrivals in the whole year.

Little changed until the mid-1990s. The Visit Myanmar Year 1996 was supposed to boost tourism. A rather half-hearted measure. It was precisely at that time that the country slowly opened up, and if you meet ‘old-established’ foreigners today, they usually came at that time. Since the democratization in 2010, the number of foreigners living here has risen sharply and something like an expat scene has established itself – at least in Yangon. The number of tourists has now exceeded the 3 million mark annually. Let’s see what happens next …