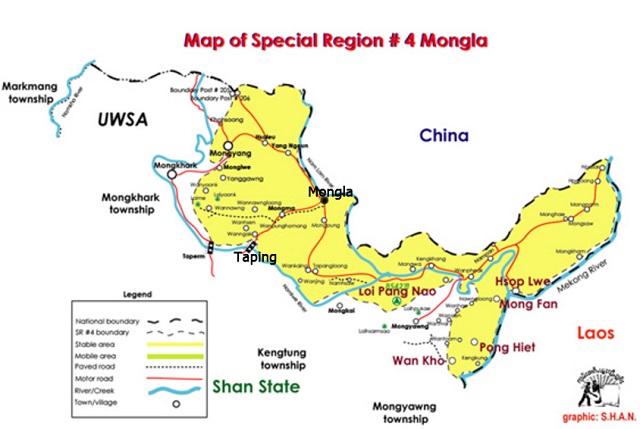 About twenty years ago I and a Burmese colleague flew to Kyaing Tong to find out about the tourist infrastructure in this seldom visited part of the country. On the occasion we made a detour to Maingla (other names are Meng La, Mong La or Möng La), the country’s “sin city”. Also called Myanmar’s Las Vegas! As far as I know, the area has been closed to foreigners, unless they are Chinese, for a long time. First we got a permit, which was relatively easy those days. From Kyaing Tong, the capital of the North Eastern Shan States, we went northeast to Maingla, about 100 km away. After crossing the Taping River, we reached a checkpoint that marks the border with Shan State Special Region No. 4 marked. It is controlled by the National Democratic Alliance Army (NDAA), one of the splinter groups that formed after the dissolution of the Communist Party of Burma (CPB White Flag). In 1989 the army’s infantry, which consisted mostly of members of the infamous Wa tribe, rebelled against the leadership. Various successor organizations emerged, of which the United Wa State Army is certainly the most powerful.

The NDAA is under the command of a certain Sai Leun, a Hainan-born Chinese who moved to the area as a Red Guard in the wake of the Cultural Revolution. He quickly moved up the career ladder and became one of the most important commanders. After the collapse of the Communist Party of Burma (CPB), he took over control and he was one of the first to sign a ceasefire agreement with the Yangon leadership. His soldiers were allowed to keep their weapons and he promised not to rise again against the central government. Since then, he has been able to do whatever he wants in “his” fiefdom. At first he turned to the opium trade, later he was also active in other fields: gambling, prostitution, etc. These proved so successful that in 1997 he declared his small empire “opium free” and had even built a “Drug Eradication Museum”. What a mockery!

We arrived in Maingla in the afternoon and found a decent moderately priced hotel room. In this city, money isn’t made from renting hotel rooms, but from gambling and other illegal activities. A tried and tested concept: If you offer the customer an inexpensive, beautiful hotel room, then you can fleece him all the better at the gaming table and elsewhere! In order to be able to pay for the hotel room, we had to exchange our Burmese currency (kyat) for Chinese yuan. Because in Maingla only the latter counts! The city gets its electricity from China and it is connected to the Chinese cellular network. We stayed there for two days. The whole city was brightly lit, a welcome contrast to Kyaing Tong, where power cuts lasting several hours were common. Everything seemed firmly in Chinese hands. The few Burmese we met there looked lost. In the evening we went out for dinner and forced our way through a crowd of prostitutes to a casino. There the Chinese frantically gambled away their money. At a blackjack table I saw a man who held 19 points in his hand, including two jacks – and demanded another card! Impressive and depressing at the same time! And worlds away from the glamour that surrounds gambling in the western world. Down to earth!

The next day we had to register with Burmese immigration, because one way or another the area seems to belong to Myanmar. We struggled to find the building; it was in a remote area of ​​the city and the officials there were happy to meet compatriots. Then we devoted ourselves to the “attractions” of Sin City. We started by visiting the Chinese border (Daluo Port). The museum was very close by, free admission. Hats off, they really do something to fight the drug menace – if you believe the whole hoax! Our next stop was at the “animal market”, where the Chinese buy live animals – mostly protected – or parts of them. In some places the meat was prepared on the spot. Disgusting! Crocodile wrestling of course was a must: There we watched men rolling around with crocodiles in the water. Visiting a transvestite show was another highlight. I think the actors were all from Thailand. During a show, I was asked to go on stage, where two transvestites argued over me, to the general amusement.

They even included some artistic feats. The highlight was the famous flip stand, which only true experts are capable of doing. I got the impression that they had been working as circus performers in the early days of their careers. Hats off! As for me, the Chinese spectators were almost more worth seeing than the Russians. Many of them had brought children along who were visibly enjoying the spectacle. The adults sat in their seats with dead serious faces and clasped hands, and pretended not to look. I couldn’t imagine why they had come there. Finally, we took a nice photo with the two slim Russian women and went back to the hotel. An impressive experience that I still fondly think back to today.