Where Rangoon’s High Society once congregated

The Rangoon Turf Club was where Rangoon’s high society gathered on Sundays. The turf club was situated on the then outskirts of the town, in Kyaikkasan area. Around this spacious ground were stands for the patrons but of course the most prestigious place was entrance to the Member’s Stand where only Europeans and local renowned personalities, like successful entrepreneurs and high government officials are admitted.

The areas around the turf club were occupied by paddocks, where race horses were trained. That time the areas in Kyaikkasan were sparsely populated. There were many paddocks located there. Our family doctor, Dr. Tom Lamech, an Anglo-Indian by birth but raised in Burma, had a paddock too, although I never heard his yearlings ever won the races. Or maybe I did not know as I was just in my teen years.

The younger brother of one of my father’s staff was at that time studying for his engineering degree and I know he worked part-time as a betting clerk on weekends to supplement his pocket money. He told me he gets MMK 25 a day for a day’s work at the turf club.

I had never been to the races. My parents do not bet horse racing nor in any gambling. But one of my Mom’s younger cousin brother was an addict. So was my hairdresser. I remember both of them calculating the handicap of each runner, the possiblities of backing a winner but never heard they won. While engrossed in their calculations not even an earthquake will distract them, I think. But come Sunday evening, if I ask them “Did you…..” – “Go away, you little rascal, do not ask stupid questions”. So I knew they had lost again.

Anyway after the 1962 coup d’etat, Gen.Ne Win shut down the races and disbanded the Rangoon Turf Club. The general himself was an avid patron and regular of the Club, playing the horses. But his rationale for shutting down horse racing was that it is making people poor. After the Club’s facilities were nationalised the tracks were converted into grounds for holding various activities promoting the country’s transition to Socialism. The Members’ Stand became a hall. The Rangoon Turf Club name was changed to Kyaikkasan Grounds. It became the main site for public display of support for the Socialist Republic of the Union of Burma (later Myanmar)

There were (3) important dates for these large public gatherings.

One was on February 12, the Union Day. The Union Flag, relayed across the country was welcomed back to Rangoon at Kyaikkasan Grounds.

The 2nd important date was Peasants’ Day, on March 2, to honour the peasants and the rural agricultural workers of the country, which coincided with the date the Revolutionary Council took over the country in 1962.

The 3rd date was Mayday on the 1st of May. 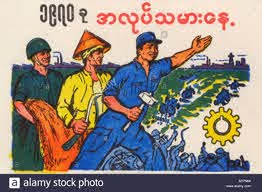