The sixth dream of the King of Koshala

Since I came to Burma the first time in 1977 I’ve been fascinated by the 16 dreams of the King of Koshala. Representations can be found at many places in the country. To my knowledge the one in the Gubyaukgyi temple in Myinkaba (Bagan) is the oldest in this country. But I might be wrong. Those dreams are important guidelines for Buddhists. A good summary can be found in Jataka No. 77 (Mahasupina). It starts with the dreams King Pasenadi (ruler of Koshala) had and which filled him with fear. He consulted his Brahmins, who explained to him that this was a very bad omen. The king asked them to do everything to prevent a disaster. Seeing a good opportunity for enrichment, they suggested that their ruler made extensive animal sacrifices at every crossroads in the country. This would be the only way to avert the greatest disaster. At that time the Bodhisatta was a wise hermit of Brahmin origin. A novice living at the king’s court pointed out to the court Brahmins that this was a gross violation of ahimsa (principle of not harming other living things). They replied that they would earn a great deal of money through this ceremony, which justified breaking the doctrine. The young man then took his leave. He asked the Bodhisatta to take care of the matter, and he said that he would help if the king would come to him. According to another version, the queen was enraged by the constant new demands of the Brahmins for the ceremony, and she urged her husband to meet with the Bodhisatta. Anyway, the king went to him, told about his dreams and asked him to interpret them. After the king recounted his dream, the Bodhisatta assured him that it was not for the present but for a more distant future when rulers would lose their righteousness. So he himself had nothing to fear and the Brahmins only had in mind to enrich themselves.

Dream #6: The king dreamed that people were holding out a gold vessel of great value to a mangy old jackal and asking him to pee in it. Some depictions also show others rushing over to have their gold vessels also peed on. The Bodhisatta explained as follows: In the future, kings would lose their righteousness. Instead of listening to counsellors from the tried and true old nobility, they would rely on upstarts from the lower classes. The upright aristocrats would be forced to give their noble daughters to them in marriage. The jackal peeing in the golden vessel stands for such an upstart. The pretty daughter of a poor Burmese couple stands for the golden vessel. The villain has forced the parents to give him their child in marriage (they probably owe him money). These dreams have always been used politically, many depictions relate to the colonial era, as can be easily seen from the people’s clothing in the Kyauktawgyi pagoda (see below). In Myanmar that upstart is usually a foreigner. In this context it is noteworthy that this dream plays an important role in connection with Mrs. Suu Kyi’s ambitions for the presidency. As the mother of children who are not Myanmar citizens, she cannot run for this office. A similar case happened in the family of Khin Nyunt, the former head of the secret service. There were rumours that he disinherited his son when he took a foreign bride. 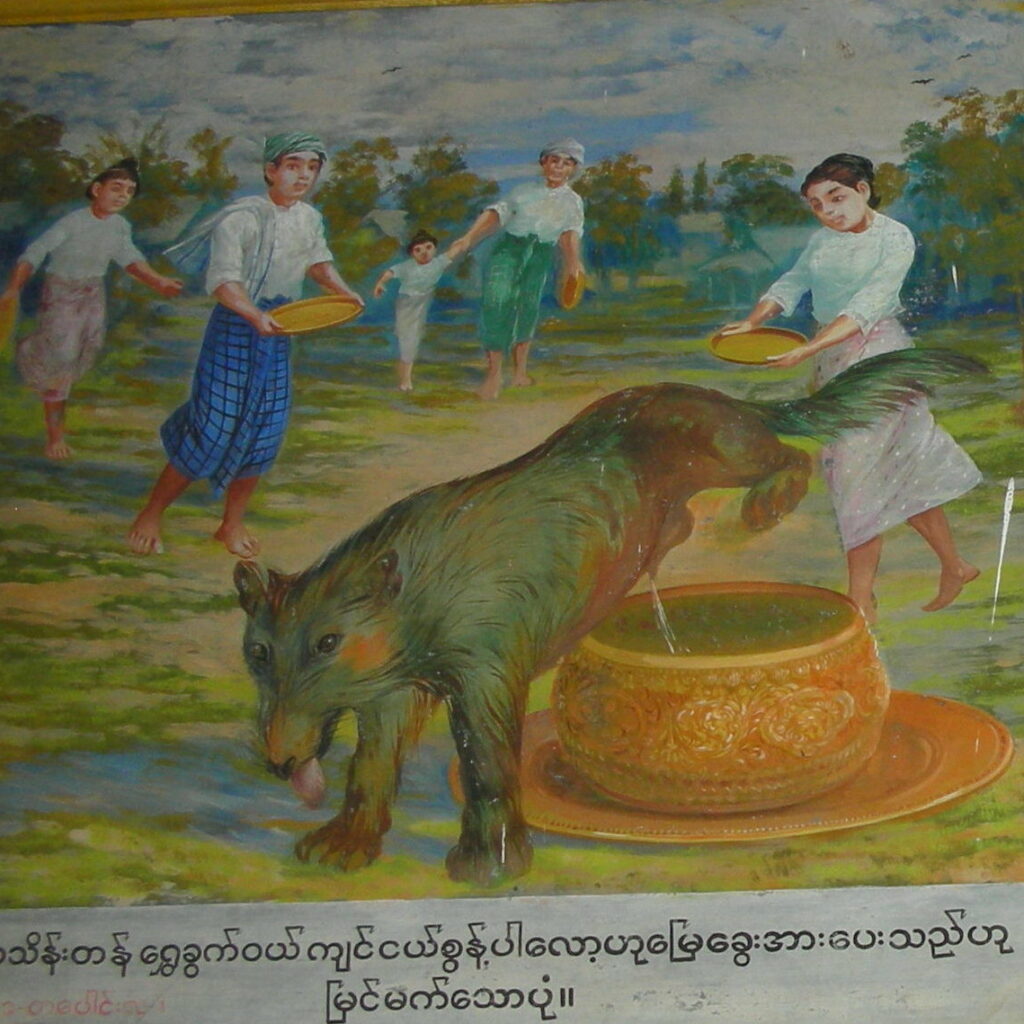 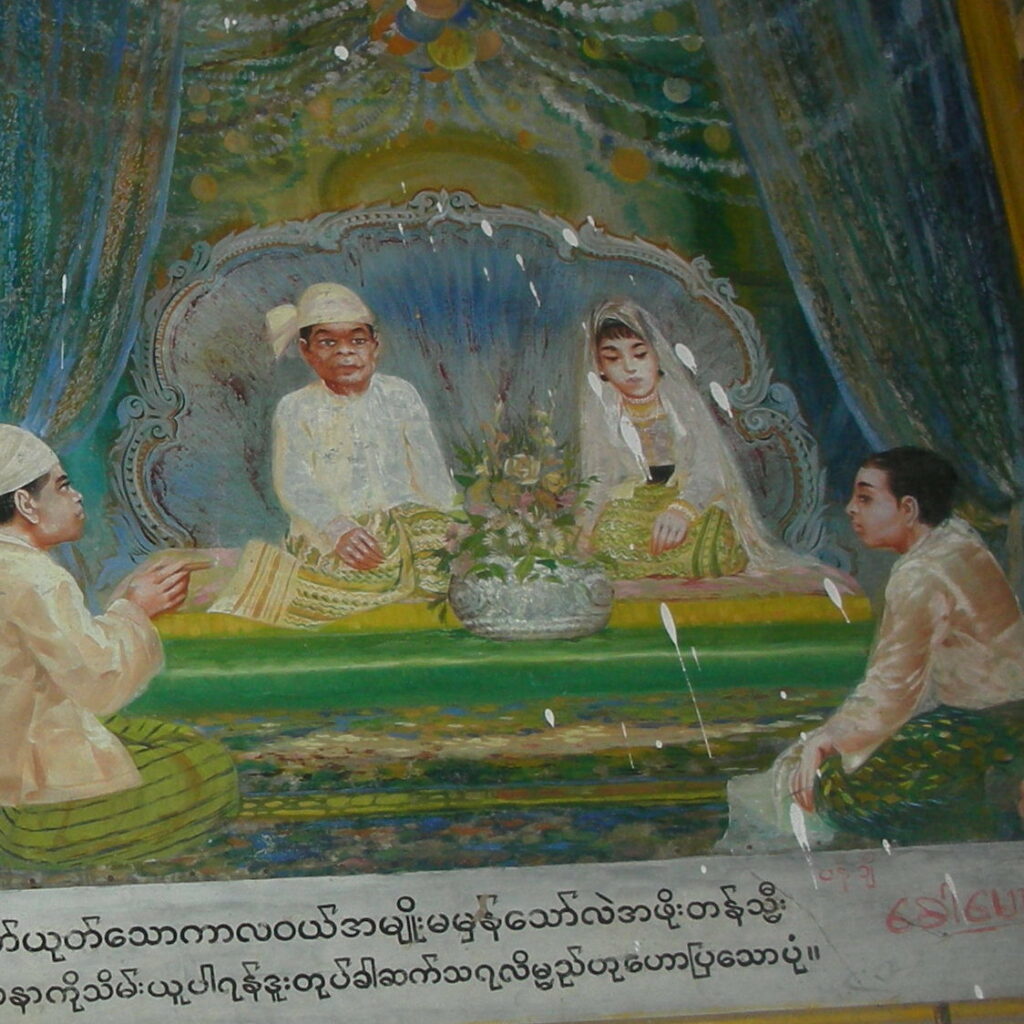 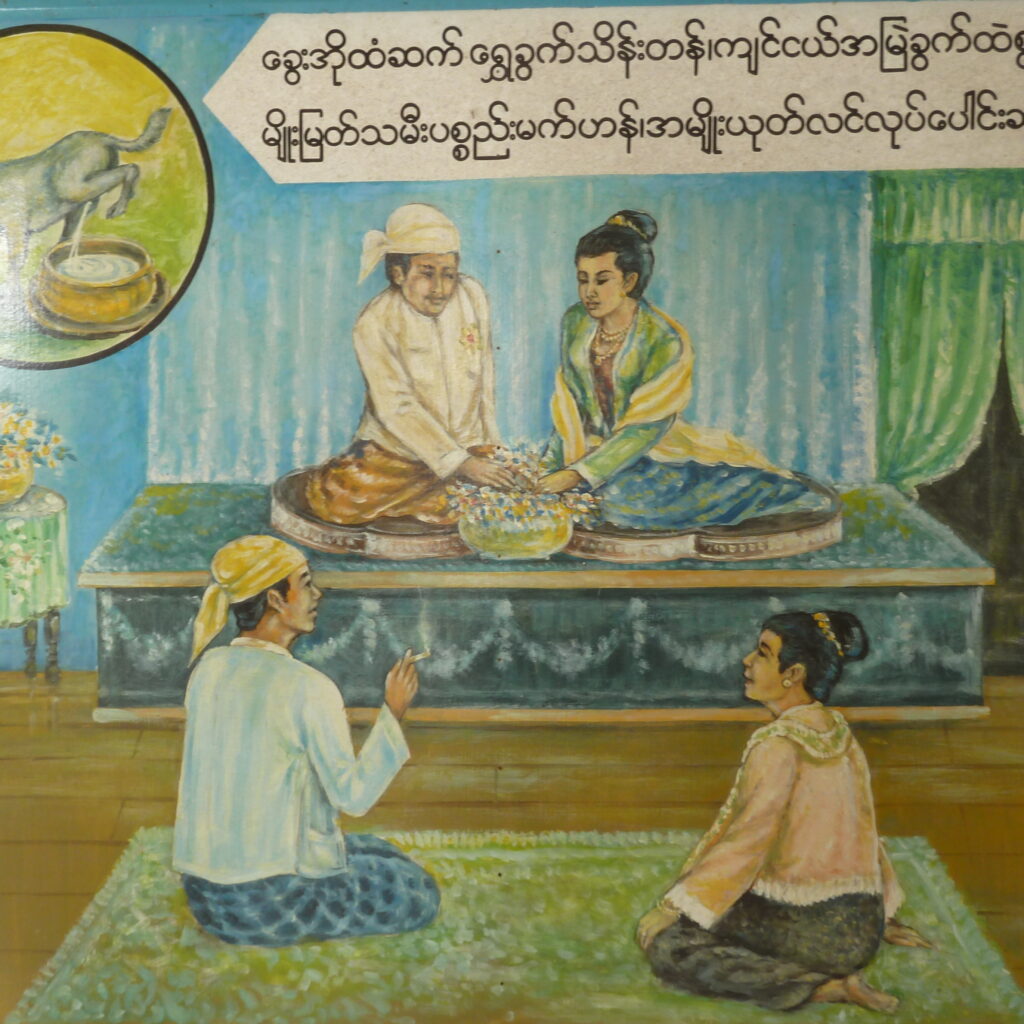 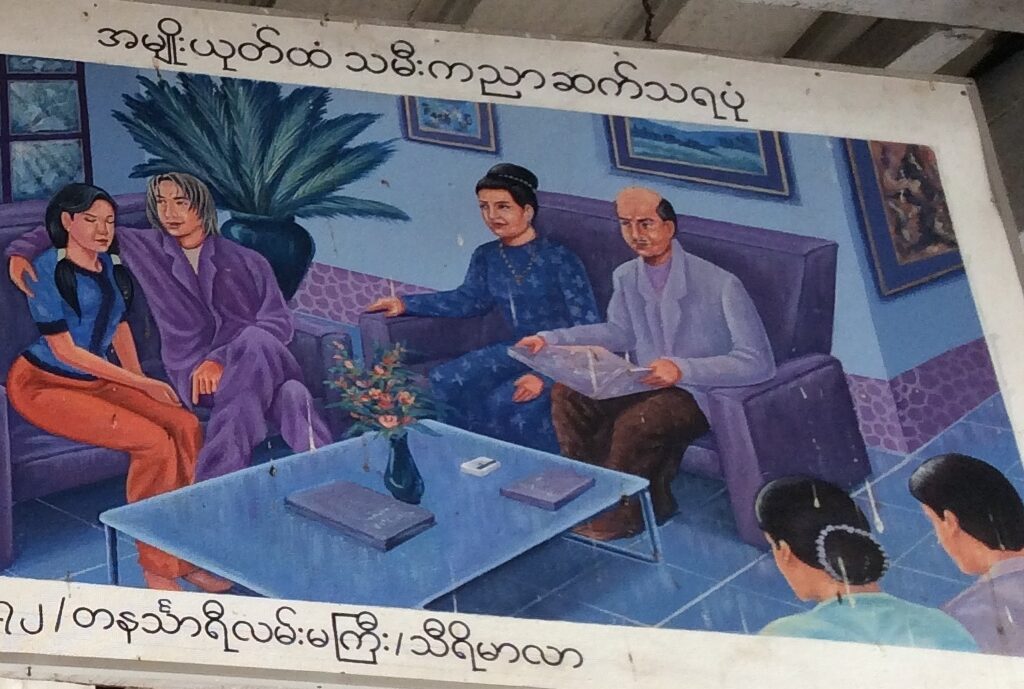 Conclusion: These stories were apparently written by very conservative people who feared for their sinecure. The fear of change is felt everywhere. Not only peers, but even people from the lower classes are considered competitors. If you apply this to the present day, you can’t help but state that we are living in the dark future that the authors so feared. The people determine their rulers (at least that’s what they think…), there is a strong dislike for foreigners, ‘misogyny’ – it’s all there! An interesting aspect is that King Pasenadi was undoubtedly a contemporary of Gautama Buddha. In Jataka No. 77, on the other hand, the latter is presented as a Bodhisatta, i.e. a being that carries Buddhahood within itself. Which means he was not yet incarnated as Gautama.

According to Cocker, there were 470 incarnations in between. Or 473 if you count the Burmese way … What I found most interesting is the changing image of the unwanted son-in-law. I’ve selected three images. The first is from Kyauktawgyi pagoda in Mandalay. The images in this pagoda relate to the time of British colonial rule in Burma. There he is most probably a man of Indian origin. The second is from Yae Le pagoda in Kyaikkami. The foreigner looks like a Chinese (correct me, if I’m wrong). My favourite is the one in the lately built Sasana 2500 pagoda in Ye. He looks like a Westerner to me. I like his rather cool suit. But whatever they wear or wherever they come from – they remain the same old jackal … And the worst: I’m one of them!