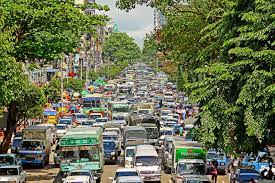 In many advanced countries traffic lights are linked. If a driver keeps to the prescribed speed and nothing gets in his way, he can be pretty sure that he will see the next traffic light turn green when he arrives and may therefore drive through without stopping. In Myanmar, however, it’s different! It seems that the traffic authority of Yangon has succeeded in finding a way to prevent just that. No matter how fast or slow a driver goes, he can be assured that the next traffic light will turn to red exactly when he’s approaching. This way he may enjoy the full waiting period. Should this sophisticated system fail, the police will intervene and ensure that the waiting will be incalculably extended. Not to mention approaching VIPs … Why is that so? I suspect that this phenomenon is related to the herd instinct of Burmese drivers who do not perceive a traffic jam as a nuisance, but as a welcome opportunity to spend time with their compatriots. And of course they’ll never turn off their engine in a traffic jam – no matter if they have aircon or not!

It seems to me that this instinct plays an important role, too, when it comes to the slow response of the road users. My taxi is waiting in a long queue at one of the city’s notorious junctions and we’re waiting for the traffic light to finally turn green. And then the long-awaited moment comes: the traffic light turns from red to green for 60 seconds! There are about ten other cars in front of us. No problem, we’ll make it. Piece of cake! 10 seconds pass: Nothing happens. 30 seconds – nothing! 45 seconds – nothing! And then the car in front of us finally starts moving forward and stops after 20 metres (= 4 car lengths) before the traffic light turns red again. How’s that possible? Have the drivers in front of us fallen asleep while waiting? Or are they slow on the uptake? Or is it because the bus driver in the right lane remembers at the last minute that he actually wanted to turn left and is now desperately trying to cross three lanes?

Or because the taxi driver in the left lane actually wanted to go straight? This happens quite often, because there are quite a lot of wise guys among Burmese drivers. If too many vehicles are waiting at the intersection, they boldly swerve into the opposite lane. Sometimes even two lanes of the opposite directions are blocked … And then they’ll charge forward as far as possible. After reaching the head of the line of vehicles they’ll try to get into the left turn lane, even though in fact they intend to go straight. Just stretch out your arm and squeeze yourself in – that’s how it’s done! In order to prevent this, the Yangon city government started to place concrete blocks (painted yellow and black) at critical points around the middle of the 2nd decade of the 21st century. For better or for worse, drivers are forced to stay in their lane. And the manufacturer of the blocks probably became a millionaire …

Quick guess! Why does the driver of a vehicle waiting in front of you at a traffic light suddenly open the door of his car? Does he want to get out and walk around his car to make sure everything is okay? Fill up engine coolant? Check tire pressure? Or to confront another road user whom he accuses of having blocked his way? None of that! In 99 % of the cases he wants to spit out his betel juice! The red traces of the popular drug can not only be found on the streets but on  the side of any public bus as well. Sometimes the betel juice monotony is broken by puke as many passengers – unaccustomed to riding a bus – relieve themselves out of the window.

But this is by no means a specifically Burmese problem. In the 1980s I took the night bus from Lake Toba (Sumatra/Indonesia) down to the city of Padang (home of the world-famous Nasi Padang) on the coast and was delighted that I had managed to get a window seat even though I had booked only on short notice. Unfortunately, it was during the Muslim month of Ramadan, when the faithful stuff themselves after sunset only to lose all of it while jolting down the hairpin bends. And I was the one who had to throw out the plastic bags filled with puke.