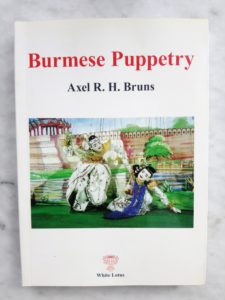 An old friend of mine, the publisher Diethard Ande from Bangkok, asked me during a visit if I wouldn’t be interested in writing a book about Burmese marionettes for his publishing company. In English, however. The project tempted me as so far I had only written short texts in that language. An Englishwoman named Vivian (unfortunately I forgot her family name) served as editor. The result was a book in which the extensive and detailed analysis of Burmese marionettes of my doctoral thesis was reduced to the essentials.  Which made reading it much easier. Otherwise all information from my thesis is included and I think it can be rightly considered as a standard work on that topic. Unfortunately we couldn’t get hold of a Burmese font. Therefore the Burmese script is missing in the glossary. I have tried to redress this shortcoming with an instruction for the pronunciation of Burmese words. Apart from that the structure of the book is the same.